Little bit of contrast in the Bay

After a few days in San Francisco I knew that it’s a time to leave. It’s not because I didn’t like the city, quite opposite – I liked the city too much and the longer I would stay the harder it would be to leave. But I wanted to spend one more night in the bay area, from the other side, in Oakland. The reason for that is my Columbus friend Caryn, she grew up in Berkley and all of her friends lived now in Oakland. The logic is very simple – she is awesome, so her friends must be too, so when her friend Rena invited me to stay with them I was very excited.

The one thing that I didn’t know that it was first Tuesday of the month and in San Francisco it means that all the museums are free. I couldn’t miss this opportunity, so from the early morning other couchsurfers and I started our museum hop.

The first on the list was de Young museum and mainly because of Jean Paul Gautier exhibition. It wasn’t free but it was 50% discounted that day and it totally worth it. I was never really interested in fashion, but I always was interested in creative people so it was fascinating to learn about the story of this genius and his impact on modern fashion and pop culture (it’s not just because of Madonna).

After we finished with this exhibition we went to the other parts of the museum: impressionism (that is actually one of my favorite styles), photography and eventually the exhibition of tribal art that had collections from Africa, Oceania, North and South America that made me think how amazingly creative people are and how in less industrialized societies people made art even from most practical things. Just imagine how cool it could be if every chair, plate or even laptop were pieces of art.

Before we went to the next museum we had a lunch break at awesome Myanmarian restaurant, and then went downtown to the Museum of Modern Art and there was a lot of art. I started to think that part of the idea behind free day beside contribution to the community is also teasing the community, because after brief look at the 4 floors of the museum you realize how much more time you could spend there. The only part that disappointed me was a photography exhibition by Cindy Sherman and I think it’s just very overrated. I get all the point of changing identity using clothes and makeup but to present her as one of the most influential artists of our time is little bit too much 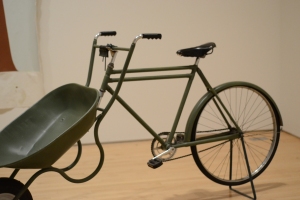 The last one that we visited was the Contemporary Jewish Museum and there was a fascination exhibition about trees. I knew before that about big importance of trees in Jewish life but I learned much more there. It was getting late and I had to come to Rena’s house before 7, because they planned to go to the baseball game. I had to hurry up. By the time I left Jeremy’s house I was in time to stuck into the traffic. It was hard to pass between cars with fully loaded bike, so it took me a while to get on the Bay Bridge, but after that it was much easier and I was in Oakland on time.

Rena lived with her boyfriend and other friends, I honestly couldn’t figure out who actually lives in that apartment and who just came to visit, but all of them seemed very cool and fun. We got ready for the baseball game, it means hiding a lot of alcohol in our bags and clothe. I was going to the baseball game for first time in my life, and probably the last one because I don’t like the game, but I tried to be open minded for the new experience.

I don’t like baseball for one simple reason – it’s boring. It’s boring because most of the time nothing happens and the worst is that you never know when the game is going to end. The only time that I tried to watch the game on TV I felt asleep. I was curious to know why being on the stadium is much better. And 3 hours later I understood what it’s all about, and guess what – It’s not about the game. We barely watched the game, but we got really drunk, bought overpriced beer and hot dogs, ate a lot of peanuts and just talked about everything. Once in 15 minutes there was a good moment and everybody turned their heads towards the field, but just for a few seconds. After the game we came back to the apartment and continued to party. Overall it was super fun. I also think we could just buy more beer instead of the tickets, but I guess it’s much more fun to get drunk with thousands of strangers on the stadium while watching boring game that encourages you to drink even more.

Next day I was able to have a few good conversations over the morning coffee, spend some time writing and reading and then slowly packing and preparing my self to leave the Bay area. After two visits and almost 2 weeks in total I can say for sure that it became my favorite area in the States. I hope I’ll be able to come back here one day, but now it was time to go to Big Sur and South California.

2 thoughts on “Little bit of contrast in the Bay”